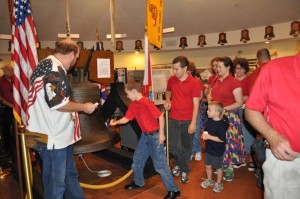 The Liberty Bell Memorial Museum serves as the anchor for Honor America’s focus on education. Entry to the Museum is free. The Museum includes:

The Rotunda of American History
The rotunda is where the major milestones in American history are depicted in a timeline fashion, as well as historic documents and other patriotic memorabilia. This portion of the museum houses a replica of the Liberty Bell. There are also exhibits relative to the history of Florida which include: pre-revolutionary period artifacts, items recovered from the old forts throughout the state, early education, the naval air station of Melbourne, and space exploration.

Background of the bell
The replica of the Liberty Bell is a focal point of the museum. In 1976 in the year of our nations Bicentennial Celebration the children from the South Brevard public schools raised money to purchase a full-sized replica of the Liberty Bell which serves at the centerpiece in the Rotunda. The bell weighs about 1 ton and was cast by the Whitechapel Bell Foundry in London, England, who cast the original bell in 1751.

Freedom Hall
Freedom Hall, an annex to the museum, was added in 2005 through the efforts of many volunteer individuals, business and financial organizations. Freedom Hall is a tribute to the men and women of America’s armed services. It contains an area that displays Military Awards and Decorations, a display of each of the major wars in which America has been involved, and a display honoring each branch of the service. These displays include artifacts, photos, uniforms, weapons and models representing the various time periods. Freedom Hall also includes a rotating exhibit, Scout displays, and a spotlight on Brevard Heroes and Patriots.